Round and Round the Mulberry Bush

Warning! Warning! This post wanders all over the place and is far too long but, huh, it’s the best I can do. With luck and a fair wind I'll get better at this blogging thingy. In the meantime, make yourself comfy and settle down to a nice long read . . .  or not.

At the end of my second post I mentioned that I would be posting my thoughts about charities. Then I promptly forgot. Now I can't remember what I wanted to say about charities. That's the frustration of old age; the memory goes on walkabout leaving us with empty spaces and blank expressions.  It is also the beauty of old age; memory is the gift that keeps on giving because when the memory returns we get the pleasure of remembering all over again. However, I recently learned that memory loss has little to do with age, but rather with the lack of routine and a busy schedule. In other words, the old have the leisure to meander through time, to trip down memory lane when and if they feel like it, and, if all older people are like me; they just can’t be bothered remembering stuff.

It used to upset me tremendously when I couldn't remember events or forget an appointment, or forget to do a regular task, like flea treating the dog. I used to have a very good memory and could recall exact, pertinent details of practically everything and got distressed when I lost the ability. Now I couldn't care less if I forget stuff because I realised it doesn't matter not one jot if I remember or not. The sky doesn't fall in if I can’t remember what I did last week or two years ago, the bureaucratic system doesn't grind to a halt if a bill is seriously late, my friends don’t care if I forget their birthday and there is no one around to challenge my recollections of my distant past and, anyway, they are my memories not theirs.

This brings me to the subject of this post. My eldest grandchild keeps asking me to tell her stories of about my childhood. So, before I lose or muddle all my memories altogether, I have decided to use this blog as a way to record stories of my life so my grandchildren will have a record of what it was like to grow up and live through some of the most fantastic times, with the greatest inventions and social changes that have occurred in the modern world. Having never met my own grandparents, I think it would be nice for my grandchildren to know who I was, what I believed in, what I did and why I made the decisions I made about my life.

First, it’s important to know that I was born in the November of the year that the Second World War ended. There was a time in my early teens that I thought of myself as a victory baby; that my parents celebrated the end of the way by conceiving me, as a kind of passionate hope for the future. But, that was pure fiction on my part because the war in Europe didn't end until May and, as I was a full-term baby, weighing in at 7lbs and some ounces, the dates just didn't add up. Perhaps now would be a good time to mention that I've always had a vivid imagination and a strong desire to be seen as special. This desire was earlier fuelled, if not caused, by the birth of Prince Charles, the heir to the throne of England, on the SAME day as my birthday. For years I thought there was a special bond between the bonnie prince and me because we shared a birthday. 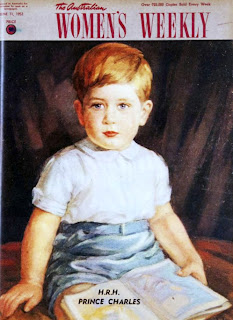 By the time I was ten years old I had figured out that there were millions and millions of people who shared the same birth date of Prince Charles, thus ending my claim of 'specialness'. By the time I was eighteen I was a fervent, if closet, anti-royalist; I would not have dared tell my mother that I despised the whole idea of royalty. She would have had a fit! She identified strongly with the queen who, like her, had four children and behaved at all times like a gracious lady, something my mother strived to be at all times too. Even when I became an active and out anti-royalist I never told my mother. I don’t really know why I didn't tell her. It wasn't to save her feelings because we argued about so many fundamental things, like our differing philosophical, political and religious perspectives. I suspect I never told her because I believe she modelled herself on the Queen and what being a gracious lady meant to the extent that she would have thought I was saying I didn't like her. Whereas, when we argued about other issues it was always based on differing ideas and concepts rather than personalities.

The reason my birth at the end of the war was important was that the Labour party was elected into government and they introduced the welfare state. Without it my childhood would have been so much bleaker. Without this political change my childhood would have been one of hunger, crippling deformities and equally crippling ignorance. To be housed, fed, schooled and given free access to specialist orthopaedic surgeons provided me a healthy life with a mother and a home. If the Labour party had not introduced free welfare for all after the Second World War and because my father died, my siblings and I would probably have lived our lives in abject poverty or in an orphanage and/or been sent to the colonies as child migrants.

In fact, we only escaped being sent to Australia as child migrants because of the strength of our mother. In 1954 mum was taken to hospital very ill and had to have a hysterectomy. We four children were farmed out to two families in the catholic parish; two boys together and two girls together. Eventually we children had to move to another county and go stay with unknown aunties and uncles and we didn't see mum for three months. Many years later I asked why she had been away so long and she told me that during the operation she lost a lot of blood and had to have a transfusion but was given the wrong blood type and almost died. While she was convalescing, a social worker (they called them Almoners in those days) came to visit with forms to be signed. These forms gave permission for us children to be sent on a boat to Australia with hundreds of other children. This is what had been decided would happen to us if mum had died. Fortunately for us, mum refused to sign the forms, although she said she thought about for a little while. Knowing now the harrowing stories of the children who did not escape this fate I am forever in my mother's debt.

What made it possible for my mother to make such a choice was a change of political will and raising the consciousness of the whole country to the moral, political and financial necessity of having universal access to basic standards of living, education and health care.  Having access to a widow's pension provided by the state, a pension that did not depend upon having rich parents, an annuity or a trust account meant my mother could keep her four children at home and feed, clothe and educate them. Don't get me wrong, it was NOT easy. The pension was meagre and without my mother's resourcefulness we would not have thrived as well as we did. But thrive we did and luckily remained a family in our little council house on the outskirts of Leeds, Yorkshire, in a post war Britain that enjoyed universal state benefits. It wasn't paradise but better than anything a pre-war Britain could have offered. And for that, I am eternally grateful.

Do you have a good memory?
In what kind of political and economic system did you spend your formative years?
Did you feel special because of something or someone that had nothing to do with you?
What secrets did you never divulge to your mother and/or father?

Tez
Fremantle, Australia
Generally jolly but I can also be sarcastic, snippy, and grumpy. This is not a new ‘old lady’ thing – I’ve always been like this. Yea, I’m an old geeky woman – what more could you possibly want!